The Time of My Life by Patrick Swayze and Lisa Niemi 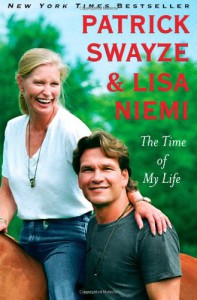 Patrick Swayze was a part of my childhood; I grew up watching his movies. He was a great actor and versatile with his roles in movies/TV.

Many times throughout my childhood my mom and I watchedNorth and South. She had the VHS times and I can't even count how many times I watched that miniseries as a kid. I think in the mid 2000s, the series was finally released to DVD and my mom bought it on DVD. I watched it then, too, and have watched it many times as an adult. It's such a great miniseries and Patrick Swayze was amazing as Orry.

But as much as I enjoy his movies, I have to admit that I never really knew much about his life.

There is a lot of honesty in this biography; Patrick doesn't paint himself as an innocent person who has done no wrong. He lets his weakness and insecurity show. And I never would have thought he was insecure because he always seemed so confident. But it seems he was very insecure pretty much all his life. And this insecurity made him want to be the best at everything and do whatever he had to so people would like him.

But he was also someone who cared for others and deeply loved his wife. He had his faults, but overall, I think he was a good person. And he was talented, but not just at acting.

I honestly didn't know he could do so much stuff until I read this book. He had lots of interests and tried to master them all.

This is a great biography and a real insight into the lives of both Patrick and Lisa.
autobiography-biography-memoir